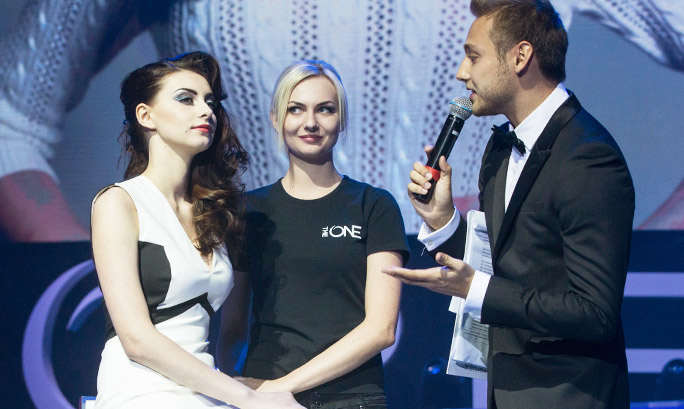 Grand Beauty- battle continued for 17 weeks. During this time, the contest brought 900 videos, and 270 makeup artists participated in the project. Only six of them were nominated to battle each other for the title of official make-up artist of Oriflame. The final task for the finalists was to do the make-up for the cover of the Oriflame catalog.

During live broadcast viewers can watch as the battle-finalists worked with models, and one of the looks was to bring its author a stellar deal.

Winner was chosen not only the members of the jury, which consisted of creative director and makeup artist Oriflame Jonas Wramell, designer Kira Plastinina, senior partner of Oriflame Snezana Polezhaeva and singer Dima Bilan, but the whole audience in real-time. 6000 visitors could cast their vote by sending an SMS. Receiving the highest score of the jury and the Audience Award, Alena Tereshchenko from Abakan has won the title of the Official Oriflame makeup artist and star contract of 2 000 000 roubles. She has perfectly coped with the task, demonstrating professionalism, creativity and sense of style close to Oriflame standards.

Kira Plastinina: "It is very hard to choose and I think this task was one of the most difficult - the previous task opens up more space for imagination, while the make-up for the cover of the Oriflame catalog involves some restrictions."

Dima Bilan: "Can you imagine how many images participants had to look through in their head, getting the task only on the stage? As for work, it seems to me, Alena Tereshchenko showed herself remarkably."

Snezhanna Polezhaeva "Acquainted with Alena Teresh-chenko, communicated with her backstage, I saw her energy and her desire to win."

Despite her young age (21), Alena has a four-year professional experience. She was the first make-up artist mastered the technique of aeromakeup and body- painting at home in the Republic of Khakassia. Alena immediately attracted the attention of the jury by her video where she transforms into a heroine of Mila Kunis from "Jupiter Ascending". Many also remember her work on the futuristic makeup. In the semifinals, she surprised everyone when showed the look of the Witch from a fairy tale "The Wizard of Oz" in the task "Fairytale Make-up."


Alena Tereshchenko, official makeup artist for Oriflame: "First of all I would like to express my gratitude to Oriflame for this ambitious project - Beauty-battle! I'm really happy and pleased with victory and honor to become part of the world of beauty and success - the world of Oriflame. The fact that I am today standing on this stage, once again proves that in Oriflame any dreams, even the wildest, come true. You just need a will to win and a belief in yourself! "

In the nearest Alena plans in Oriflame is to part in photo and video shooting, work on events and presenta- tions of new products, original workshops, the creation of articles for catalogs, magazines and website.

My Life, My Style

5 tips for digitalising your business

Read now
My Life, My Style

Read now
My Life, My Style